Angela Easson will be hitting the road this September 2022 for a bunch of live shows in NSW and Queensland.

This August/September Angela Easson will be touring Queensland including performing at Gemfest in Anakie, Tannum Sands, Yeppoon, Port Douglas, Ellis Beach and Townsville.

Angela will be performing acoustically for all her shows. Make sure you come along and hear her perform throughout Queensland in 2021!

For venue times and details, please jump over to her gigs for more information. 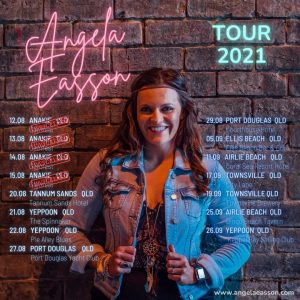 As the world (and our country) reacts to the spread of COVID-19, we have decided to cancel the last part of our tour for South Australia planned for early April. We feel it would be irresponsible for us to continue with the tour given the latest updates of the virus and furthermore, we need to put the wellbeing of our fans and ourselves as a priority.
The Johnny Cash Live Shows with Daniel Thompson for the Brass Monkey for Friday 27th March and also Melbourne for 17th April have also been postponed to later this year. If you have tickets for these shows, please see their website or facebook page for further information.

I am so sorry to have to cancel and postpone shows – it honestly breaks my heart to have to do this but unfortunately, these measures are out of our control.

Angela is performing in Queensland, New South Wales, Victoria and South Australia in the coming months – and it doesn’t stop there!

Check out where you can see her perform live this March and April 2020.

This year Angela Easson will join the Johnny Cash The Concert Shows performing as “June Carter” across Australia for several shows.

Tickets are on sale here

This March/April 2020, Dani Young and Angela Easson will embark on a tour together crossing 3 states.

Commencing early March they will be playing shows together across Queensland, New South Wales and South Australia.

Catch them at one of the shows below:

The album will officially be released for download on 11th January 2019.

Tamworth 2019 is just around the corner!

Check out where I’ll be this January 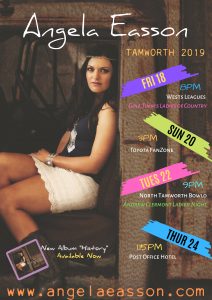 With the album presale happening very soon, have a listen to one of the tracks from the new album “Call The Police”
Have a listen and let me know what you think. Don’t forget to sign up to fanmail to hear when the exclusive presale for the new album “History” will be happening

The new album HISTORY is almost here!!! By signing up to fanmail, you will hear shortly how you can purchase the album in an exclusive album presale!

The new album “History” won’t be officially released until 2019 but you will have the opportunity to purchase it soon and get a signed copy of the new album next month!

The presale will include:

– a signed copy of the album

– downloadable copies of the album

– combo packs of all albums

Details of the presale will only be available to fanmail members. So make sure you sign up to fanmail if you haven’t already done so.

In the meantime, have a listen to one of the tracks from the new album “Call The Police” : https://soundcloud.com/angelaeasson/call-the-police/s-9Mx9r
Have a listen and let me know what you think!