Angela’s first single “Once Upon A Time” debuts today in the national Top 40 Country Tracks Chart at #27!

A HUGE thank you to everyone who has played the new single on radio and those who have requested it also. “Once Upon A Time” is now available for download on iTunes

This Friday night at The Norwood Hotel kicks off Angela’s WANTED Tour beginning in South Australia.

Performing at various venues, Angela will be touring with her full band and playing her new album…live.

With more dates being added frequently, keep your eyes on her gig guide to keep up to date with the latest gigs in your area.

For further information on the tour dates, check out her gig guide.

Adelaide dates are as follows: 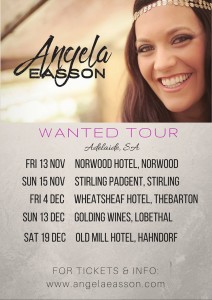 Only one week away until the official Angela Easson album launch and what a fantastic night it is set to be!

I am excited to announce the support acts for the album launch are:

Tickets are on sale now for purchase here or direct from The Norwood Hotel.

If ever you were planning on seeing a live album launch, this is the one you should see. You’ll be kicking yourself if you miss this…

The first video clip single “Once Upon A Time” from Angela Easson’s new album WANTED, is now on CMC.

Request it here and let’s see if we can get it into the Top 30!